"It is not how these officers died that made them heroes, it is how they lived." 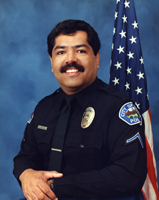 In Memory of Detective Danny Valenzuela

Danny Valenzuela came to the Brea Police Department on August 24, 1980, from the La Verne Police Department. Danny worked patrol for about seven years. He served as a motor officer for about three years. Danny was an excellent motorcycle rider and assisted in training several motorcycle officers. In 1990, Danny transferred into the detective bureau and became a burglary detective. He worked burglary for about three years and then moved to robbery / homicide.

On May 23, 1995, while participating in bicycle training, Danny suffered a fatal heart attack. Danny became the first Brea Police Officer to die in the line of duty. He is greatly missed at the Brea Police Department. He is survived by his wife and four children. 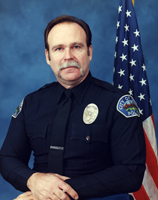 In Memory of Detective Terry Fincher

Terry began his career with the Brea Police Department on July 5, 1979, as a reserve officer. He began as a full-time officer on February 8, 1980. Terry worked many assignments, including motors. He served as an investigator, handling several different case loads, including robbery / homicide, burglary, and narcotics. Terry was a peer counselor, a member of the Tactical Arrest and Containment team (TAC), and a member of the Hostage Negotiations Team.

On May 22, 1996, while investigating a crime, Terry was struck by a train and killed. Terry is survived by his wife, four children, and two grandchildren.